I write this while recovering from wisdom tooth extraction, which was a lot less painful than I expected it to be but still no barrel of laughs. I was actually hoping to get some writing done this week anyway, but haven’t so far (for reasons that became obvious the minute I woke up from surgery). Instead, I’ve been reading, binge-watching TV, and sleeping. Mostly sleeping.

Right after the surgery my sister bought me a Pop! figurine of Hershel Greene, one of my favorite Walking Dead characters. He brightened my day so much it’s kind of embarrassing. And I’m about halfway through The Hired Girl by Laura Amy Schlitz, which is perfect comfort reading: an addictive voice, great historical details, and I plot that’s leisurely enough to make me feel relaxed but exciting enough to keep me turning the pages. Plus, I’ve about two chapters away from finishing Artemis Fowl: The Lost Colony. I really can’t complain :)

I haven’t been writing, but I do have a few ideas knocking around in my head, and it’s nice to have some time to mull them over. One in particular is a story I’ve wanted to write for ages that keeps refusing to come together. I’ve had two false starts already (one went on for five chapters, the other petered out after just one). It’s frustrating, to say the least, but I do feel like every attempt is bringing me closer to what I actually want to write. Or at least I hope they are.

Last week I started keeping a WIP journal. I didn’t think I’d need one, since I write about writing quite a bit in my regular journal, but having a notebook specifically dedicated to ranting about my current projects and why my muse is on the fritz makes all the difference. (On a side note, do you guys picture your muses as anyone or anything in particular? At the moment mine feel like a bunch of crusty cowboy types who spend the day trash-talking me, which probably says a lot about my level of confidence, but it’s still fun to think about.)


Oh, and one more thing: my sisters and I recently watched Fury, which was an all-around wonderful movie. It’s also rated R, so it’s probably not for everybody, but give it a try if you like gritty tearjerkers. I promise you won’t be disappointed. 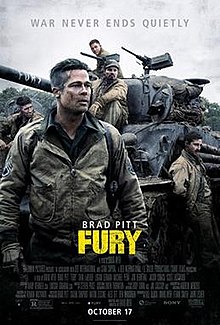 I'm still on pain medication, so thanks for bearing with me if things got a little loopy :) What have you guys been up to lately?
Posted by Unknown at 2:54 PM