Let the record show that Vincent D’Onofrio as Jack Horne was almost my only reason for seeing this one, and he did not disappoint. Neither did anyone else--this movie was so much fun, guys. So. Much. Fun. I’m kind of surprised by how much I ended up loving it.

First, though, let’s go over the mediocre stuff. The villain is named Bartholomew Bogue, so it’s a miracle anyone ever took him seriously, even if he is one step away from bathing in the blood of infants. The town he invades is called Rose Creek and looks a little...shinier than I’d expect an old West mining town to look. (Then again, I’m no expert on the old West.) And if the name Bartholomew Bogue didn’t tip you off, the story is not exactly morally complex.

None of the mediocre stuff bothered me. The plot’s predictable, but watching it I never got the feeling that anyone thought they were reinventing the wheel. It’s the predictability that lets you relax and just enjoy the characters--like I said, my favorite is Jack Horne, but I also loved Faraday (who’s played by Chris Pratt), and they’re a couple side characters who I REALLY would have loved to see more of. In a nutshell: there’s not so good stuff mixed with very good stuff, and I think the very good stuff wins out in the end. I’ll be rewatching it once the DVD comes out. 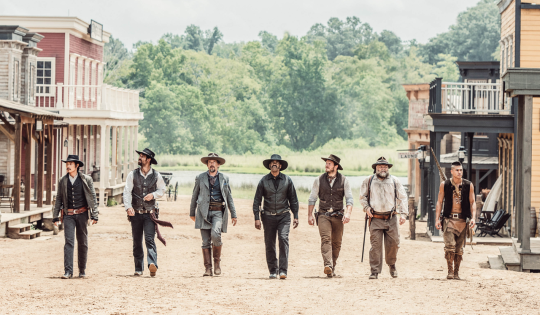 Email ThisBlogThis!Share to TwitterShare to FacebookShare to Pinterest
Labels: movies