Gobs of thanks to Joni over at lace and fog for tagging me!

The rules:
~ Paste the button onto your blog post.
~ Leave a new list of questions (or just pass on the question list you answered) and tag a few people of your random choice (and say why you tagged them, if you have time!) (Be original and nonsensical and disastrously random!)
~Write down three facts about you – one of them is WRONG. Let your commenters guess in the comments which one is wrong (and tell them in the comments after a while)
~Answer the questions of the person who tagged you – make it all super random and interesting.

The Facts…
I have never been outside the US.
I don’t read comics.
I used to have a pet hamster.

The Questions…
What is one food that you can (do?) eat mountains of because you love it so? Raspberries. I’m completely capable of polishing off an entire bag of frozen raspberries in under an hour.

If you were a Traveler Without Roots, would your home be a train car, an RV, a hot air balloon, a boat, or just a pack on your back? Or maybe another option completely? Either an RV or a boat—when I was younger I wanted to travel around the world in a house boat. A hot air balloon sounds wonderful, too, but I’m not too crazy about heights.

Name a celebrity you wish you could spend one day with. Honestly, I’m so shy I don’t think I could handle being around my favorite celebrities without clamming up or making a complete fool of myself. It’s easier to pick a character they play, in which case I’d still have to pick between Sherlock from Sherlock, Michonne from The Walking Dead, or Sam and Dean Winchester from Supernatural.


What fictional character’s house would you like to have as your own? The Burrow, definitely. Or one of the houses from the Nanny McPhee movies. Just LOOK at them… 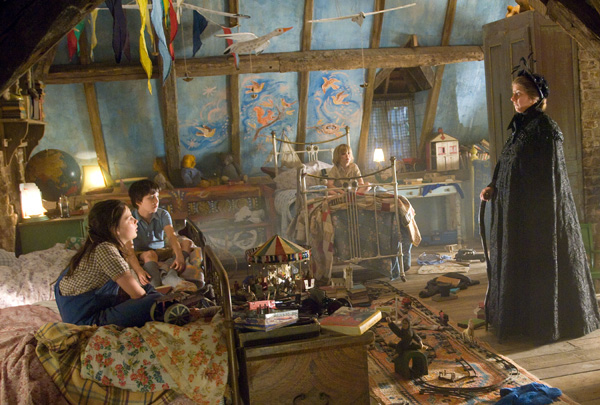 If you could take a class in ANYTHING what would it be? Cake decorating. I’ve always wanted to, though I’m not sure why.
Name a childhood obsession. TV show, stuffed animal, book, food, pastime- anything. I loved the show Teen Titans, even though I saw all of two episodes of it. Raven was my favorite character. I was also REALLY into drawing and painting when I was younger, and making miniature dolls. Anything crafty, really.

What do you think would be an awesome theme for a party? Lord of the Rings. Specifically, a Lord of the Rings themed wedding held outside, like Bilbo’s long expected party, with the minister dressed up as Gandalf and the guests as elves/Rohirrim/hobbits/rangers. And Bill the Pony would obviously have to make an appearance. The bride and groom could pick between dressing up as Arwen and Aragorn or as Eowyn and Faramir. Have you been in any clubs/groups in your lifetime? I’ve been in a book club and a writer’s group.


What’s something you have to buy all the time that you wish you could just have an endless supply of (Something that’s always the same thing- no books or movies!) Pencils and spiral-bound notebooks.


What park (national/amusement/theme/etc) would you choose to visit? Disneyland. I’ve never gone…yet. I’m extremely jealous of anyone who lives so close to Disneyland that they can go there regularly.
I tag:
Alyssa @ The Devil Orders Takeout
Heather @ Sometimes I'm a Story
Christina @ fairy skeletons

Don’t do it unless you want to, but I’d love to see your answers! (Also, Joni’s questions are so awesome that I couldn’t think of any of my own…I’ll just pass hers on!)
Posted by Unknown at 2:50 PM