Inspirations: The Secret Of Roan Inish

A little bit of background: The Secret of Roan Inish is a 1994 film set in Ireland and based on a long out-of-print book called The Secret of Ron Mor Skerry by Rosalie K. Frye. Both the book and the movie revolve around Celtic folklore, specifically the story of the selkie.

I think I was around five years old when I first watched The Secret of Roan Inish, and it’s stuck with me ever since. Maybe it’s the story, maybe it’s the gorgeous scenery (the movie was filmed on location in County Donegal), maybe it’s the eerie folklore, but this is a film that’s influenced me before and probably will again. 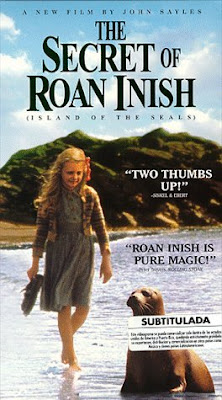 The Story
The story centers around Fiona, a 10-year-old girl sent to live with her grandparents in rural Ireland. Fiona badly wants to find her younger brother, Jamie, who was lost at sea when their family evacuated the island of Roan Inish. Jamie is a “dark one”, supposedly taking after their selkie ancestors, and has been raised by seals.
One thing that struck me on rewatching was how mystical and eerie it all is, while still being absolutely grounded in real life. Fiona believes in selkies, but also worries about her grandparents, who are about to lose their house. She wants to reunite with her brother and barely remembers life on Roan Inish. Wistfulness and homesickness permeate the first half of the movie, which makes the ending all the more satisfying.

The Selkies
The selkie in this story has a name (Nuala), but otherwise follows the original mythology to the letter: she marries a fisherman after he steals her skin, only to return to the sea years later, leaving him and their children behind. But she also has her husband build a floating cradle for their first child (floating cradles actually play a big part in The Secret of Roan Inish) and speaks incredibly antiquated Irish (since she’s MUCH older than she appears). Rewatching the movie, I can appreciate how small details like that make her story unique. Plus there’s the ways she influences her family over the generations…

How It Inspires Me
I love selkies, mythology, and the ocean. There’s a special kind of sea-swept atmosphere that I’d love to see in my own writing, mostly thanks to this movie. But more than that, I think it’s inspired my love for a certain kind of character: the outsider who’s mysterious and not quite human, and who has some sort of deep connection to nature. Characters like this have cropped up in a few of my stories--I even wrote a story specifically about selkies once. It was awful. Mostly because I was recycling the same old story without adding anything original, but also because I was scared of getting it wrong.


I haven’t found my own unique spin on the selkie story yet, but I hope that one day I will--and I really, really hope it’ll be even a quarter as good as The Secret of Roan Inish.