Or, finals are over and I have no idea what to do with myself. This is the first weekend in months that I don’t have homework I could/should be doing. It’s a bizarre feeling. I’ve been trying to catch up on reading, which helps--I just finished Secrets of the Dragon Tomb by Patrick Samphire. It’s a middle-grade Regency steampunk set on Mars, and exactly as much fun as it sounds. Very Diana Wynne Jones-esque, which is one of the highest compliments I can give to a book. 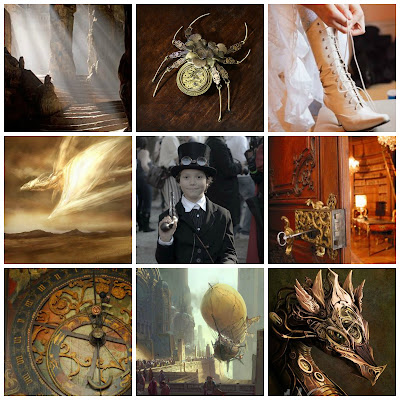 During summer, I always promise myself that I’ll read a bunch of books and write a bunch of stories before deciding that I’d much rather binge watch Supernatural for three months straight. So, yeah, I’m not expecting to be super-productive this time around, but I am hoping to keep up with writing and blogging. Maybe cook something. This morning I had avocado on toast, which is probably the closest I’ve come to cooking anything all semester. Still, it was delicious.

I’ve also resolved to not start a project unless it’s something I honestly want to write. I have a habit of starting projects more out of a compulsion to just write something than because I love (or even like) the idea itself. Sometimes it works, but mostly I end up with a bunch of soulless, half-finished drafts. Obviously I don’t have to be wildly in love with an idea from the get-go, but there needs to be a spark of something--a sentence, a mood, a character--for me to work with.

And, yep, still working on the scarf. IT WILL NEVER BE DONE.

All pictures belong to their original owners.
Posted by Unknown at 11:29 AM